Our Facility, Our Staff & Our Animals Hands-on Environmental Activities for Kids

Welcome
Owned by Nat Geo's herpetologist/personality/book author-Dr. Brady Barr and marine biologist wife-Mei Len Sanchez-Barr, Eco Adventures provides a variety of hands-on conservation programs in hopes to inspire young conservationists.  Part of our mission includes housing many rescued and misplaced animals. Eco Adventures houses over 100 native and exotic animals on display and as animal ambassadors.   Our one of a kind facility features a simulated rainforest full of animal exhibits and a glowing volcano, an  "Underwater Pier" discovery room, an outside sluice and fossil Dig, and an outside field and classroom (Pixie Hollow) that neighbors the Severn Run Wildlife Area – 1700 acres of pristine wilderness!  With each visit, you will notice something exciting and new: new animals, new exhibits, new themed decorations- and friendly and knowledgeable staff! It is our pleasure to offer extraordinary experiences in hopes to connect the public with nature! So go ahead...
Experience the Extraordinary!

Thousands have enjoyed and attended our programs, appearances at festivals and special events!

Each year at our "Earth Day Extravanganza", we raise funds for a different conservation organizations/projects and for camp scholarships. In 2018, we gave out 12 full scholarships to students in need.

At Eco Adventures, we are committed to providing the finest in conservation education. We offer enriching hands-on learning experiences through weekly classes, after school programs, camps, field trips, outreach programs, scouting events, special programs and more – all led by top-notch scientists & educators. On top of our educational programs, our parties and corporate events are sure to be the talk of the town.

Eco-Travel: Get your family ready to travel to Costa Rica to our rainforest reserve. This is the only interactive, hands-on and family-friendly travel-ed opportunity in Central Maryland!

Co-owner Dr. Brady Barr served for over 20 years with National Geographic TV/book author and serves as a scientific expert for the International Union for the Conservation of Nature. He won numerous awards for his books including the NSTA Outstanding Science Trade Book for “After a While...Crocodile”. He also won the very prestigious “Most Distinguished Alumni” award in 2017 from College of Education for Indiana University. Aside from being associated with National Geographic, Dr. Barr is currently a member of the Endangered Species Coalition of the Council of State Governments and the International Crocodilian Specialist Group. 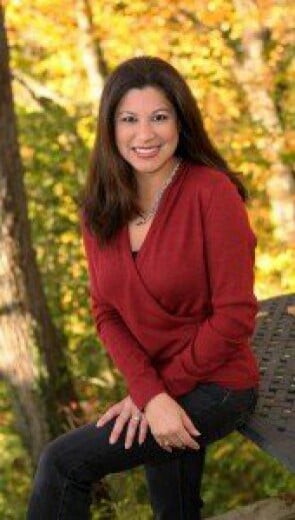 Mei Len's varied career is a testament to her lifelong passion for the conservation of the environment and its inhabitants. Her commitment to endangered and threatened species such as the Florida manatee, sea turtles, and alligators, has earned her accolades from the mayor of Miami, Florida.

She has over 20 years experience in Conservation Education at various institutions such as The National Aquarium in Baltimore, National Audubon Society, and Miami Seaquarium. As an advocate for young minority women in science, she was also featured in Baltimore Times highlighting her interesting career and achievements while celebrating women's history month March 2002. She was also chosen to appear in the Latina Magazine June issue 2006, as the featured inspirational Hispanic woman in marine biology careers.

Along with her husband, Dr. Brady Barr, Mei Len was a principal investigator in National Geographic's "Acutus crocodile Project" and have ongoing crocodile investigations in Costa Rica. Her passions include exposing her students to the natural world, marine biology, research, and cultures through Eco Travel to Costa Rica and Florida.

Mei Len is currently the Aquarium and Zoo Association's (AZA) Crocodilian Advisory Group- Education Liaison and member of the Crocodilian Specialist Group. Mei Len is a graduate of the University of Miami with a Bachelor of Science degree in Biology and Marine Science, and had her graduate work at George Mason University in Conservation Education Administration. She and her husband, Dr. Brady Barr, and 2 children live in Severna Park, MD. 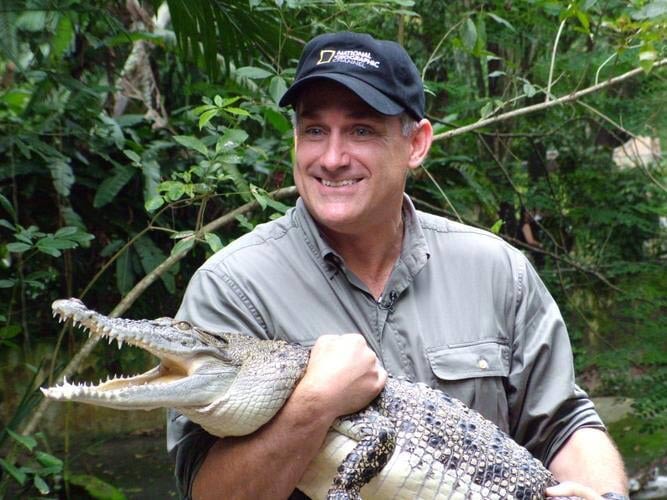 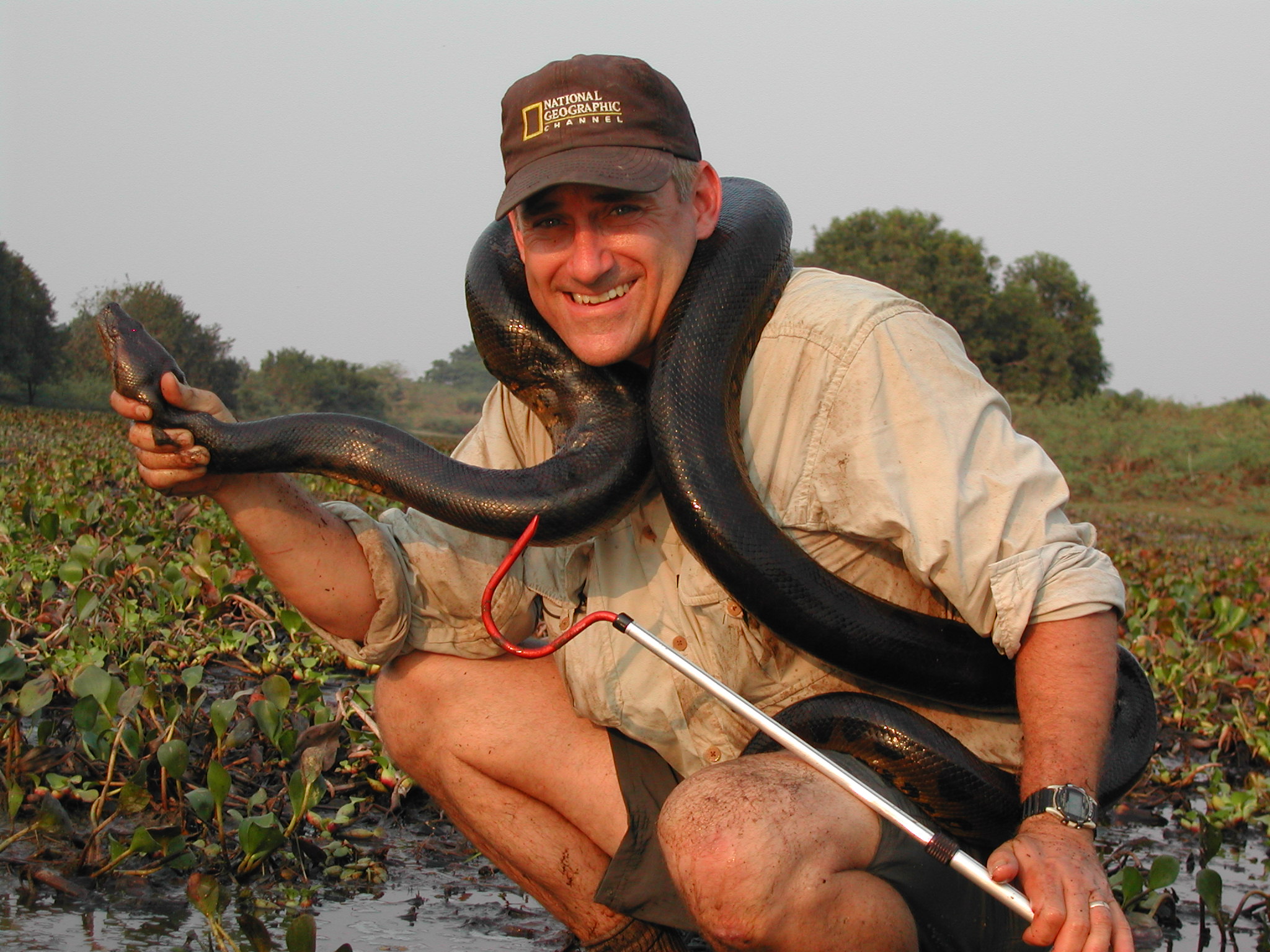 Dr. Brady Barr is a reptile specialist and television personality.

In the process he’s worked with just about every animal imaginable—from crocodiles, alligators, and snakes to bears, sharks, lions, hippos, and more.

Among his many notable achievements, Brady was the first person to ever capture and study all 23 species of crocodilians in the wild.  He’s driven by a desire to get to know crocodiles and other species in their natural habitat so that we might best know how to save them in the wild (about a third of all crocodilians are endangered).

The author of multiple children’s books about reptiles, Brady is also the star of the educational XBOX game Dangerous Encounters, a collaboration with Microsoft. On the research front, Brady has participated in studies with leading scientists throughout the world including his ongoing research, supported by the National Geographic Society, into conservation of the American crocodile in Costa Rica, and his dietary study of alligators in the Florida Everglades.

Born in Fort Worth, Texas, and raised in Bloomington, Indiana, Brady received a Bachelor of Science in science education from Indiana University in 1987 and launched his teaching career at North Central High School in Indianapolis, teaching subjects like zoology, biology, and earth and life sciences.  With a highly interactive classroom style, Brady encouraged his students to “touch, see, and feel the animals firsthand.”  He went on to receive a Master of Science (1994) and a Ph.D. (1997) in Biology from the University of Miami.

Among his many media appearances, Brady has appeared in the FOX Network Special Supercroc and logged multiple appearances on The Tonight Show with Jay Leno, Oprah, The Today Show, The View, and CNN.  He’s a frequent contributor to National Geographic Kids Magazine, an ambassador for Nat Geo’s Young Explorers Program in Asia, and an Educator/leader at the National Geographic Explorers Club for Kids. His recent speaking engagements include keynote speaker at the National Science Teachers Association, Annual Convention World Congress of Zoologists, Hoosier Association of Science Teachers, and numerous schools, zoos, aquariums, & museums and fundraising events across the country.

Brady is married to Mei Len Sanchez-Barr, a marine biologist and educator who runs eco-educational programs for kids.  They have two children.

Currently a member of the Endangered Species Coalition of the Council of State Governments and the International Crocodilian Specialist Group, Brady also serves as a scientific expert for the International Union for the Conservation of Nature. 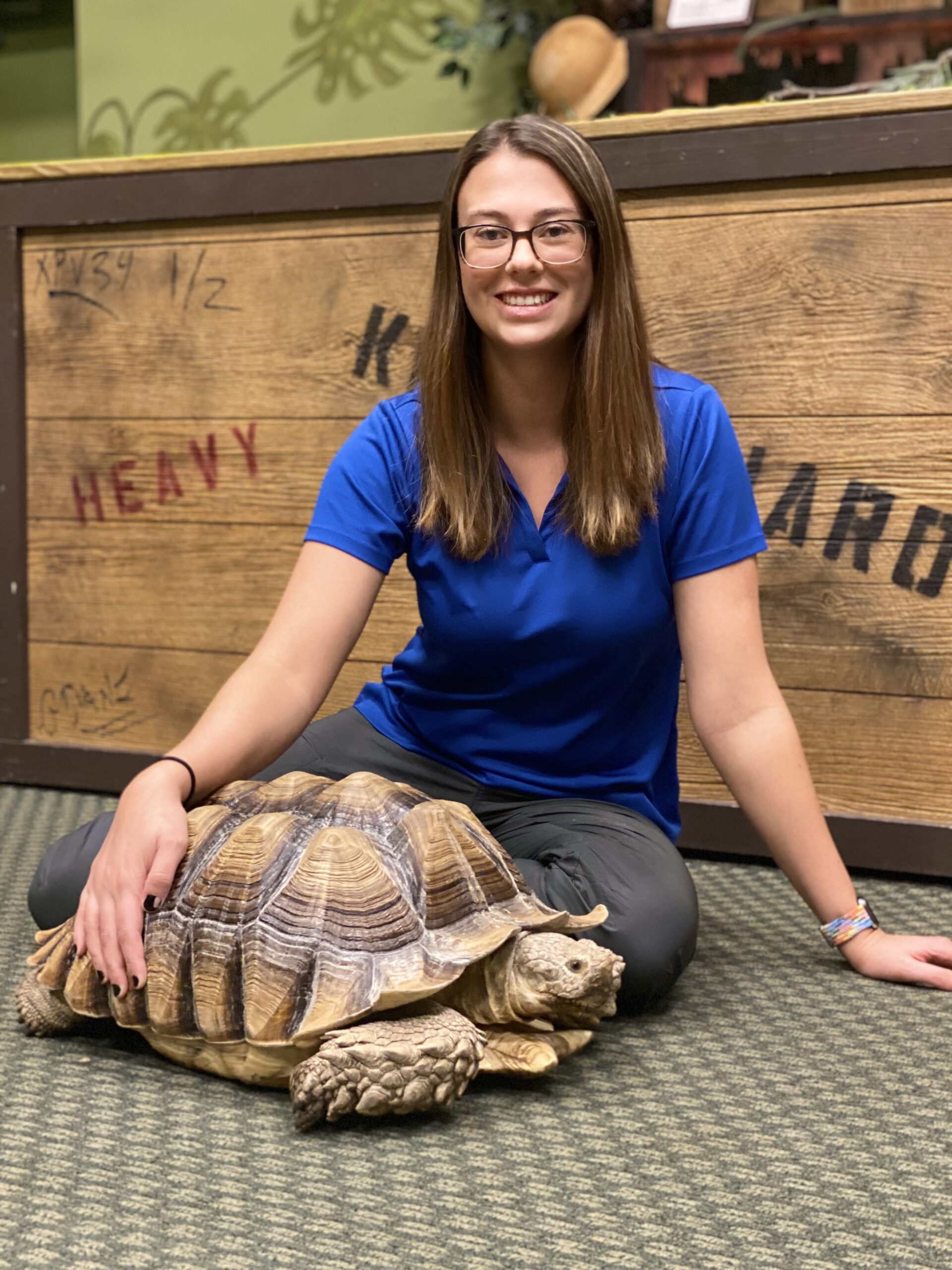 Lydia grew up in rural Carroll County where her love for nature blossomed! Lydia studied Environmental Science and Biology at Stevenson University and began working at Irvine Nature Center where she grew in her career path as the Manager of After School Programs, Assistant Summer Camp Director and Naturalist. Lydia's passion for conservation education brought her to Eco Adventures as the Camp Director and Program Coordinator, working to build Eco Adventures wonderful programming and share her passions with the next generation. When not at Eco, Lydia loves spending time outdoors hiking with her dog, gardening, camping or relaxing at the beach. 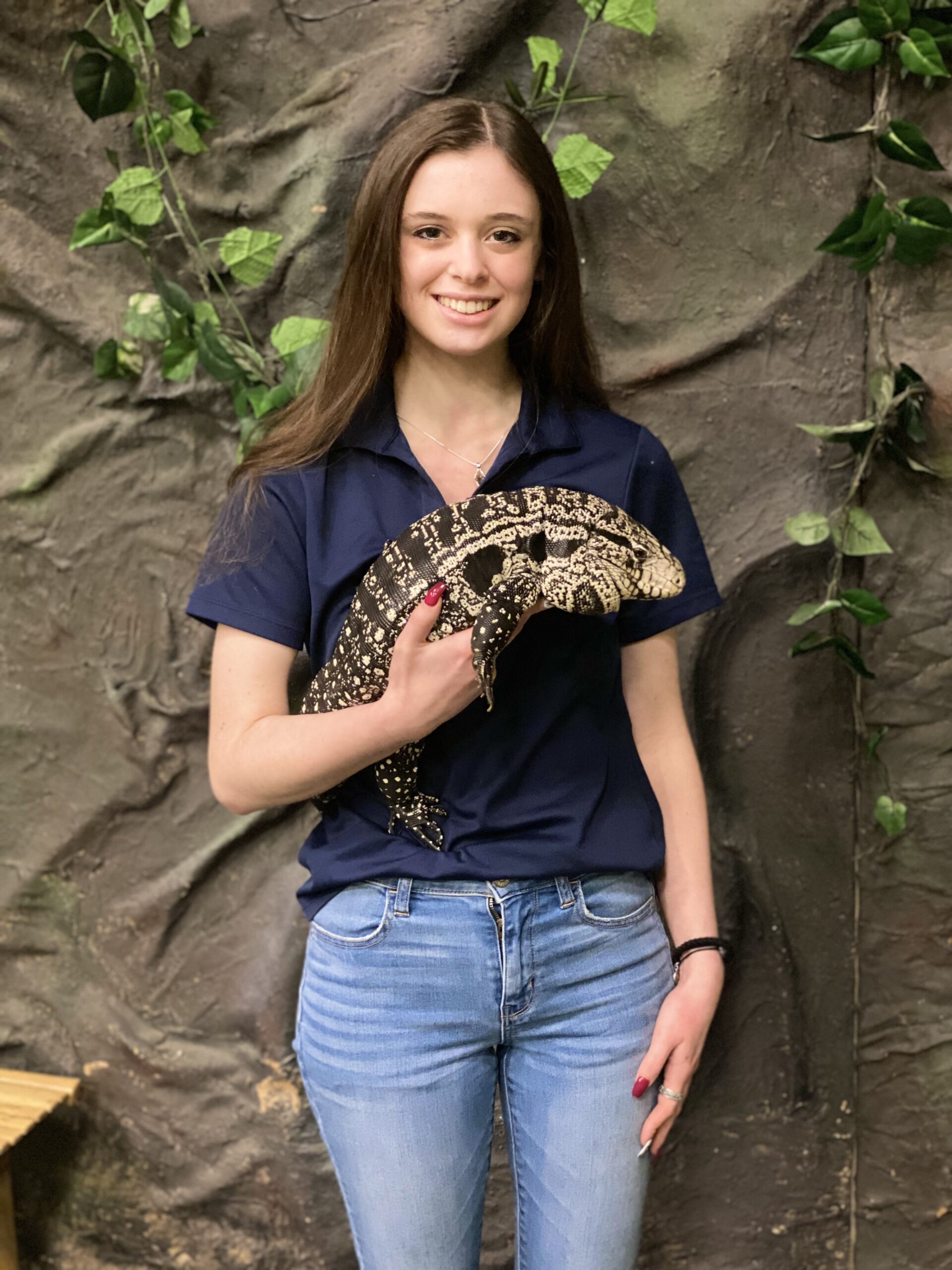 Amanda Naus started attending programs at Eco Adventures when she was 5 years old, and she’s been here ever since. Amanda first started volunteering at Eco at age 10 when she joined the Junior Assistant Program. Currently she is a lead instructor, animal care volunteer and the JA/Volunteer Liaison. At home Amanda is caring for around 18-20 animals at any given time, including birds, dogs, lizards, frogs, degus, micro-squirrels and a short-tail opossum. Outside of Eco, Amanda enjoys hanging out with friends, acting in theatrical productions, and volunteering at several organizations. 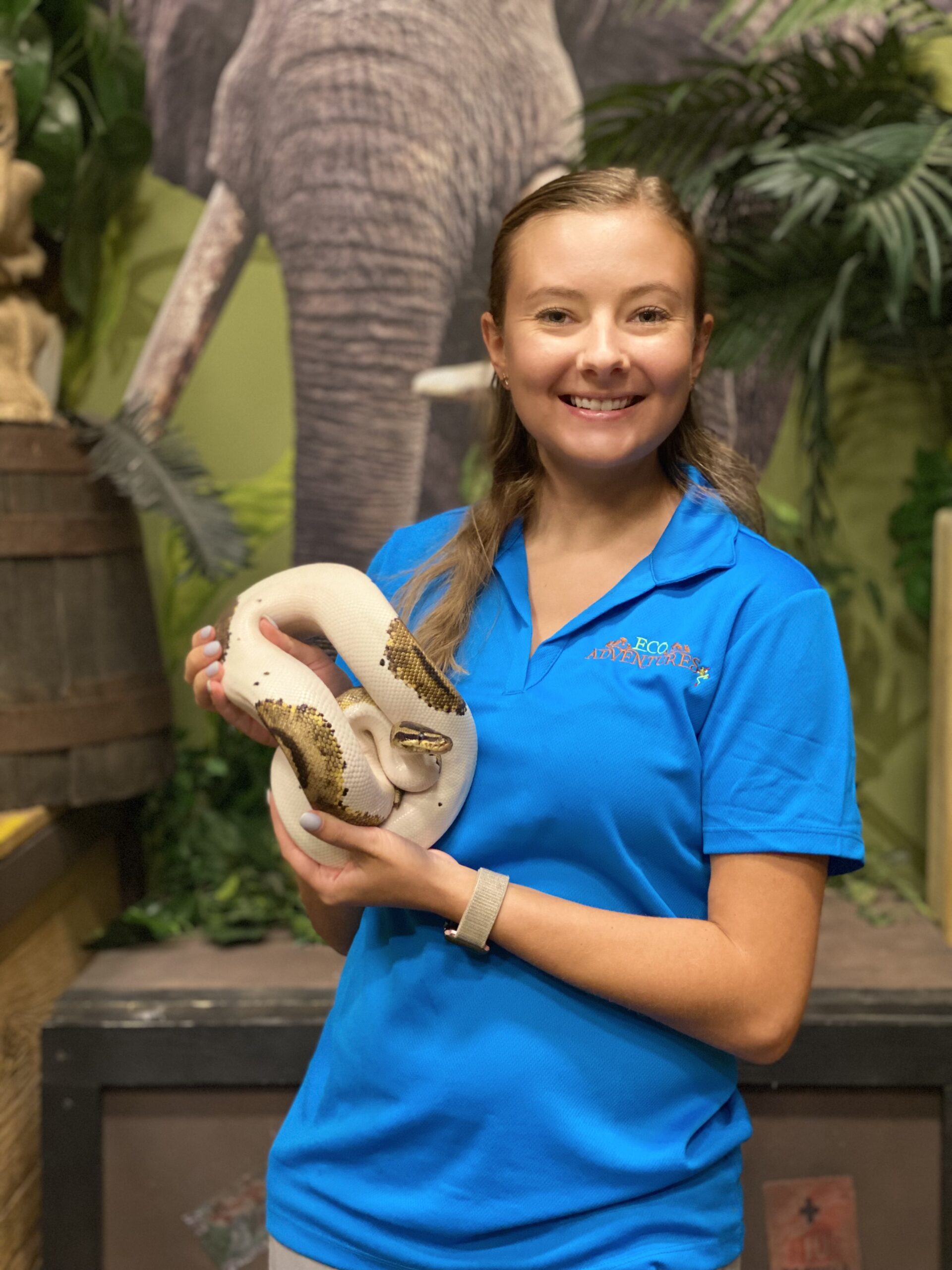 Nerissa has always had a passion for environmental conservation and educating others about wildlife. She graduated from UMBC with a Bachelor’s Degree in Environmental Studies, and completed a Graduate Certificate in Wildlife Forensics & Conservation from University of Florida. She began her career as an Animal Rescue intern at the National Aquarium in Baltimore, working with injured and sick sea turtles and seals. She also worked at Walt Disney World in their college program at Animal Kingdom for a year. She then worked at the Conservancy of Southwest Florida in Naples, Florida for 3 years as an Animal Care Specialist & Environmental Educator. She has also volunteered with many organizations including; the VonArx wildlife hospital, Conservancy Burmese python research team, Conservancy sea turtle research team, Naples Zoo, and Rookery Bay’s shark tagging and trawling research projects. Nerissa is excited to be with the Eco Adventures team and hopes to inspire others to do what they can to make a difference in the lives of animals! 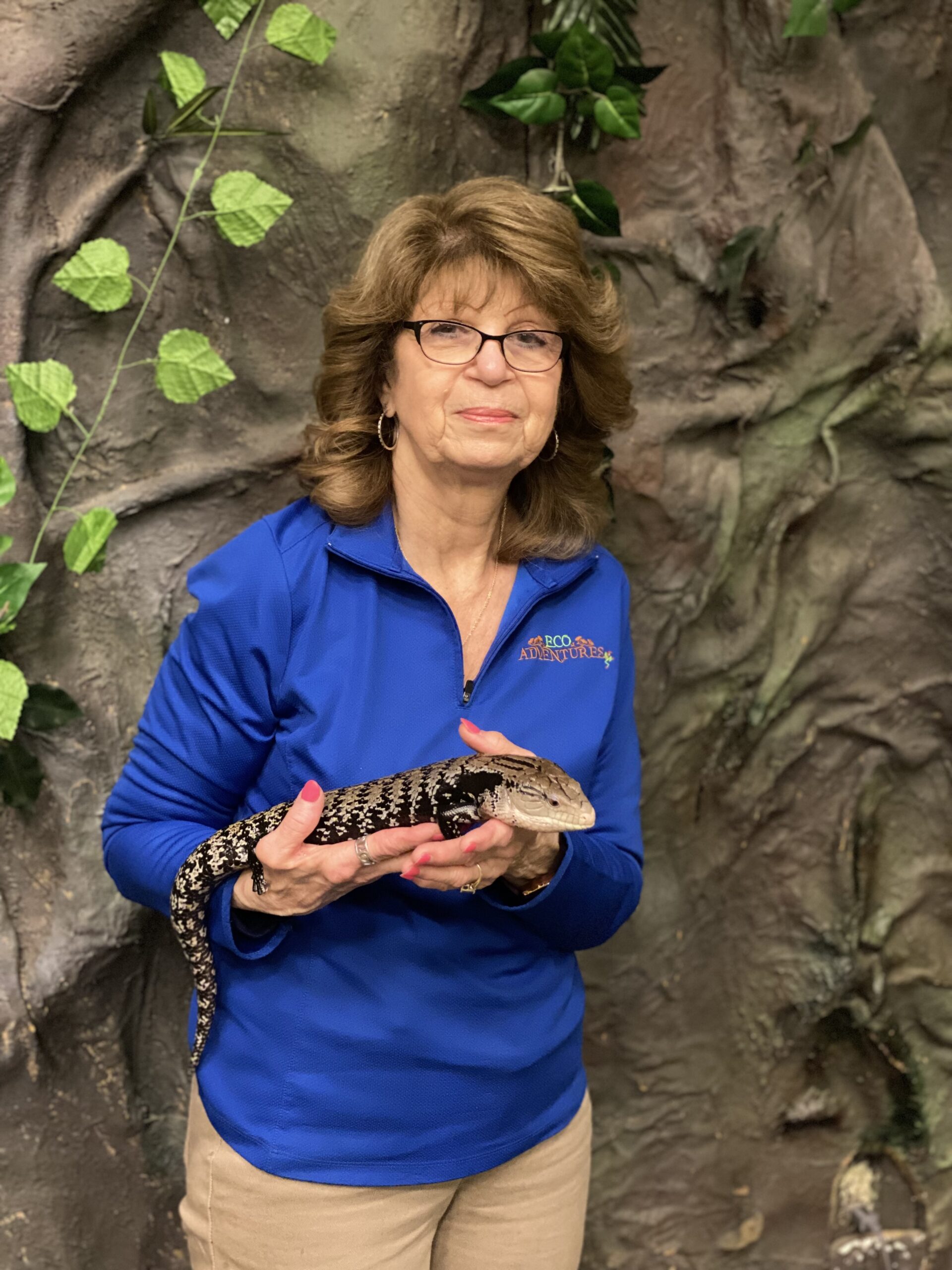 Genia loves working with children and animals. She has been with ECO since its grand opening in 2013! Genia has worked with special needs kids in upstate New York where she grew up. Today at ECO she assists with just about anything but you will see her working hard during the weekends to make unforgettable Eco Adventure's parties a success! She has a friendly demeanor that is loved by all! 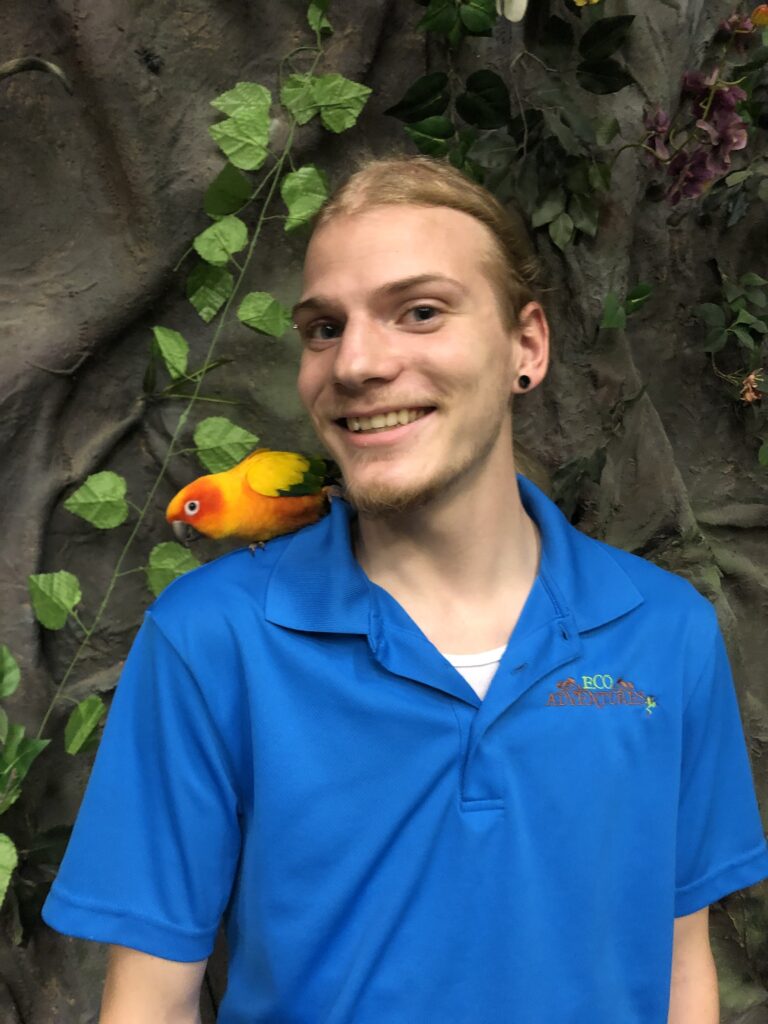 Nathan Mitchell has always had a passion for animals, and spent most of his childhood wanting to become a marine biologist. He graduated from Howard Community College with an associates in Music in 2019, but never lost his passion for wildlife. He started volunteering at Eco Adventures in 2020 to begin pursuing a career in wildlife conservation, and has found an invigorating passion caring for the animals and educating the public about these amazing creatures. At Eco Adventures, Nathan leads inhouse and outreach programs, camps, birthday parties, and other programs. 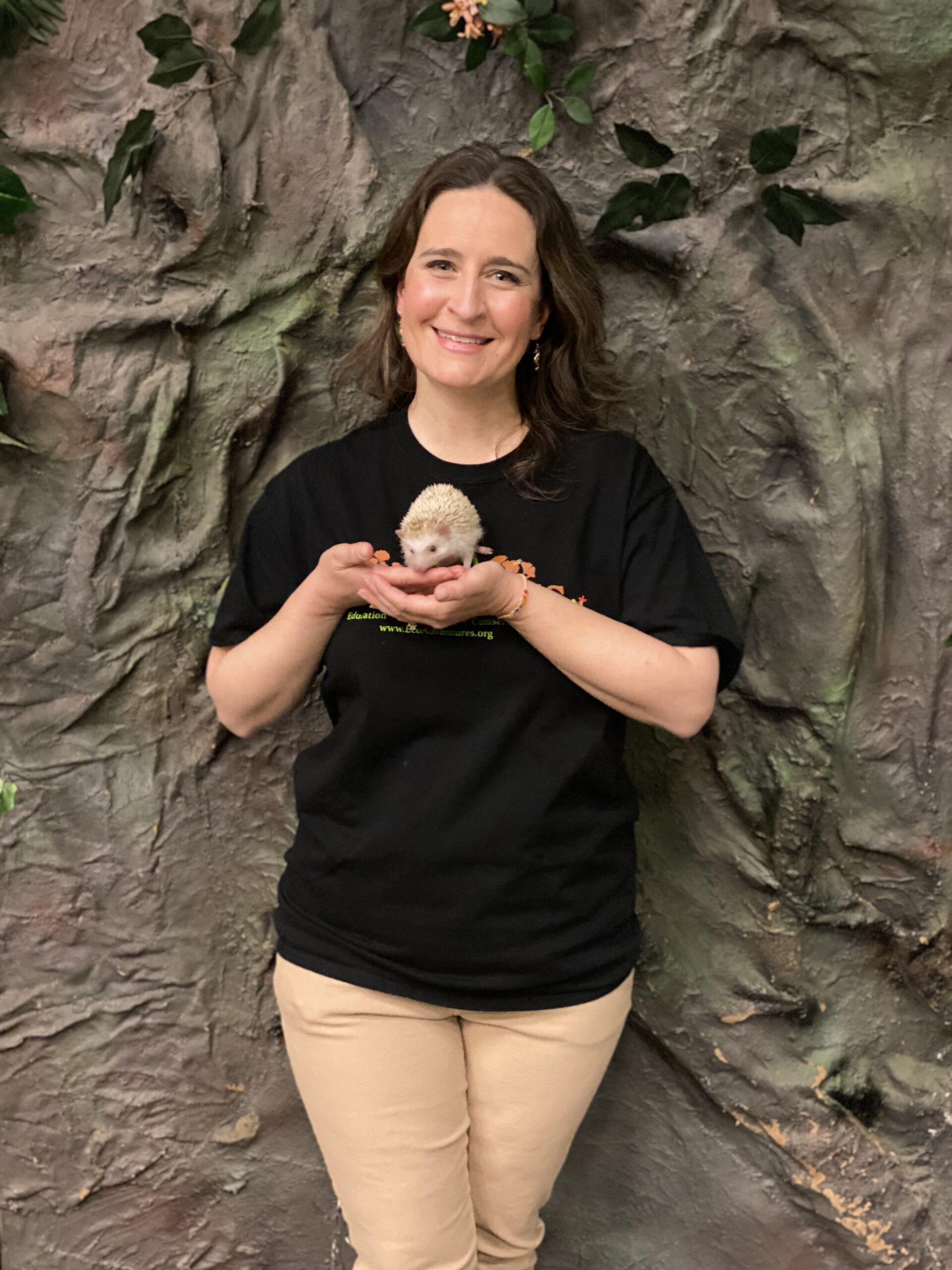 Lee Ann came on board as a volunteer in 2021 and has been bringing her family to EcoAdventures since 2016. She enjoys being part of our team where education and conservation is fun! Prior experiences include obtaining a biology degree, working as a veterinary technician, and having experiences as a volunteer, aviary assistant, and educator at the National Aquarium in Baltimore. Currently, she moonlights as a nurse and volunteers here, assisting with animal care. She is excited to help in any way that she can! 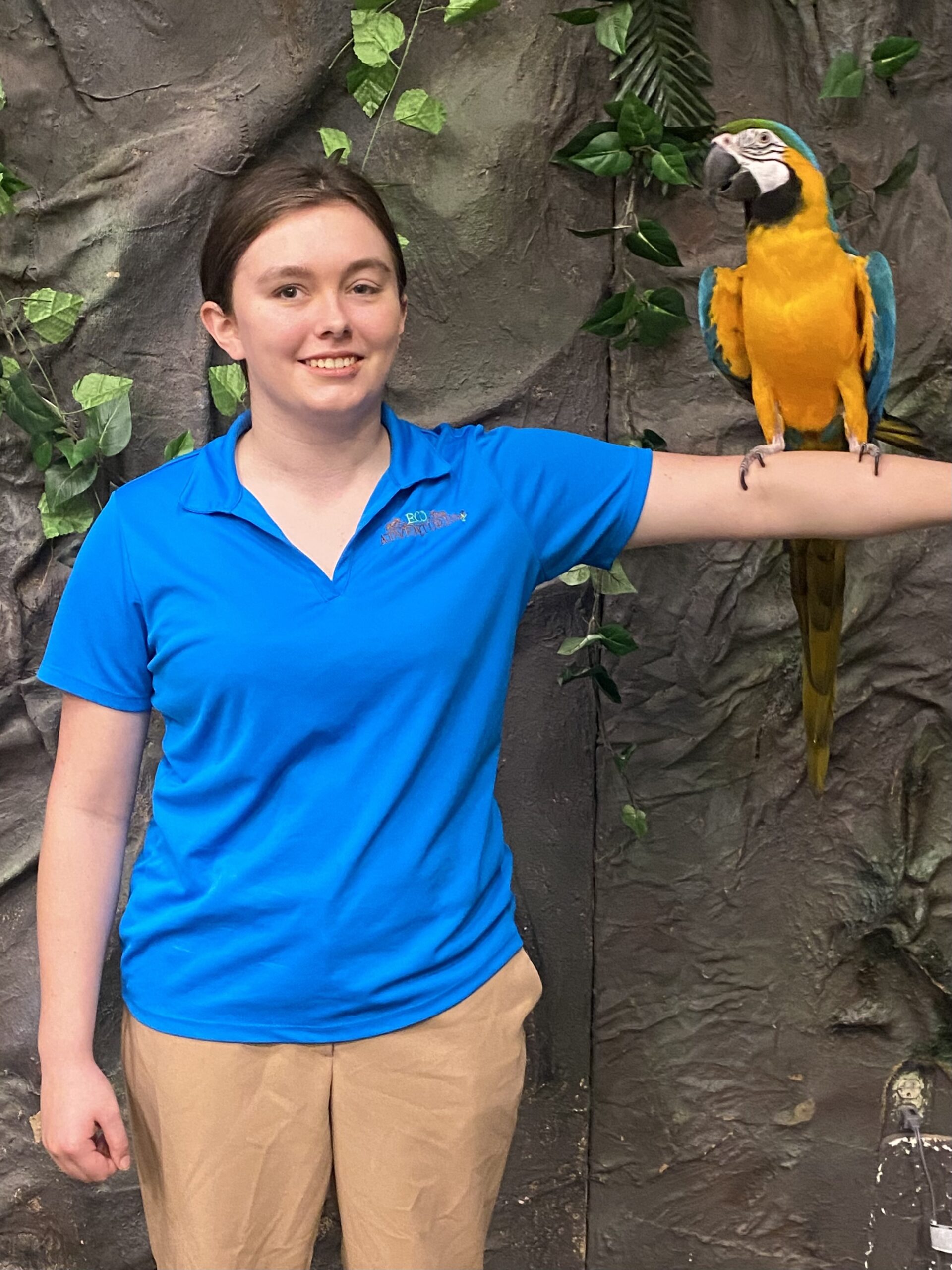 Heather grew up with an insatiable curiosity about animals and the environment. Starting in highschool, she began working as an educator at an outdoors school in her home state of washington, designing and teaching courses on the local ecosystems and leading tracking expeditions to safely encounter local wildlife in their natural habitats. During this time Heather continued with her studies and graduated from Cornell College with a bachelor's degree in Biology. She also spent time volunteering at Osa Conservation in Costa Rica, where she worked on research with monkeys, dart frogs, and sea turtles. Her inquisitive nature and passion for animals only grew in the course of these endeavors as she discovered a love for conservation education. This newfound passion led her to join the team at Eco Adventures where she hopes to encourage others’ curiosity about the natural world. 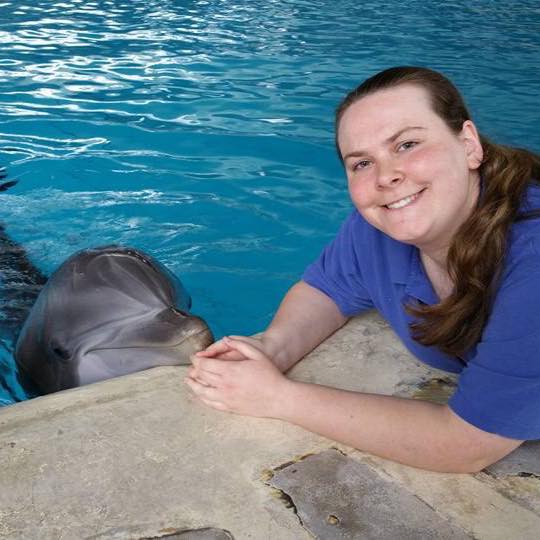 Dana graduated from McDaniel College with a degree in Biology and a minor in Theatre Arts. Straight out of high school, she began volunteering at the National Aquarium in Baltimore and put in over 3,000 hours of time there between exhibit guiding, caring for the education and rainforest animals, and assisting in the care and training of the dolphins.

Today, Dana works in the family law business but continues to work part time at Eco to enrich her passion for animals and nature. She has been with ECO Adventures since 2014.